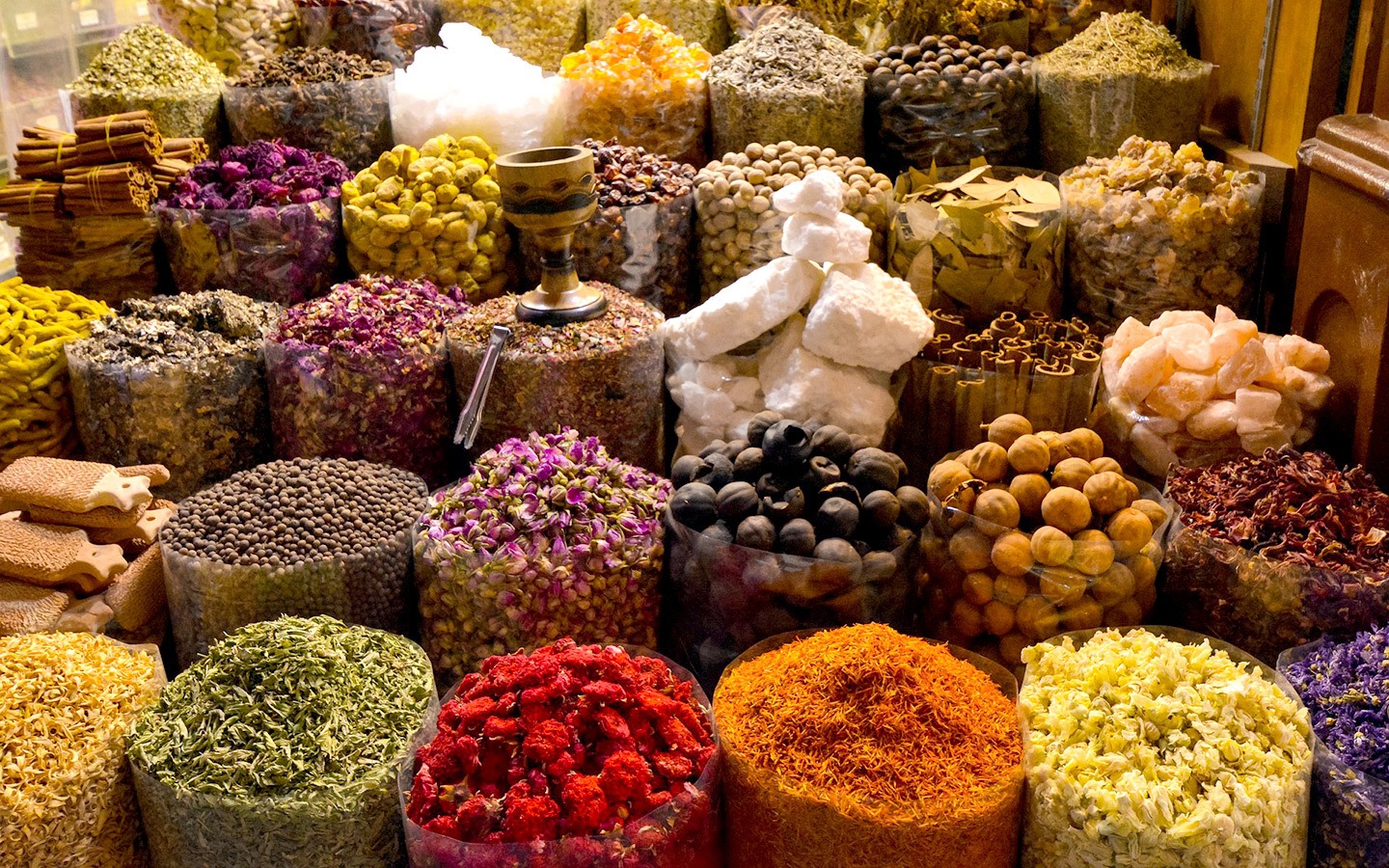 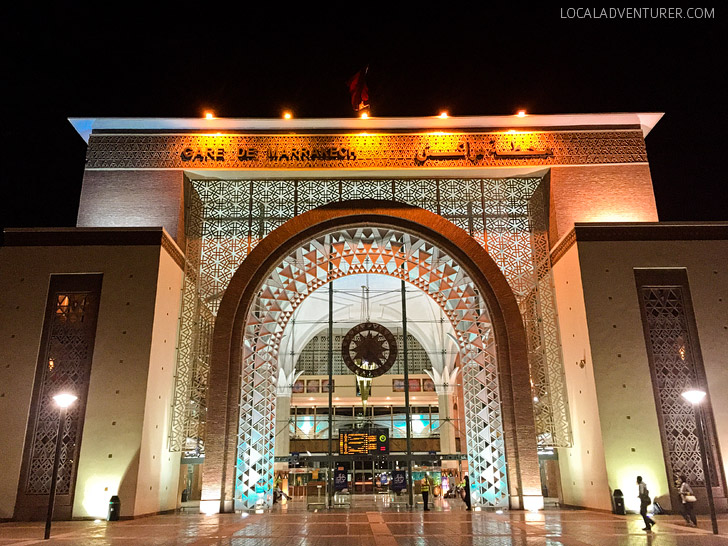 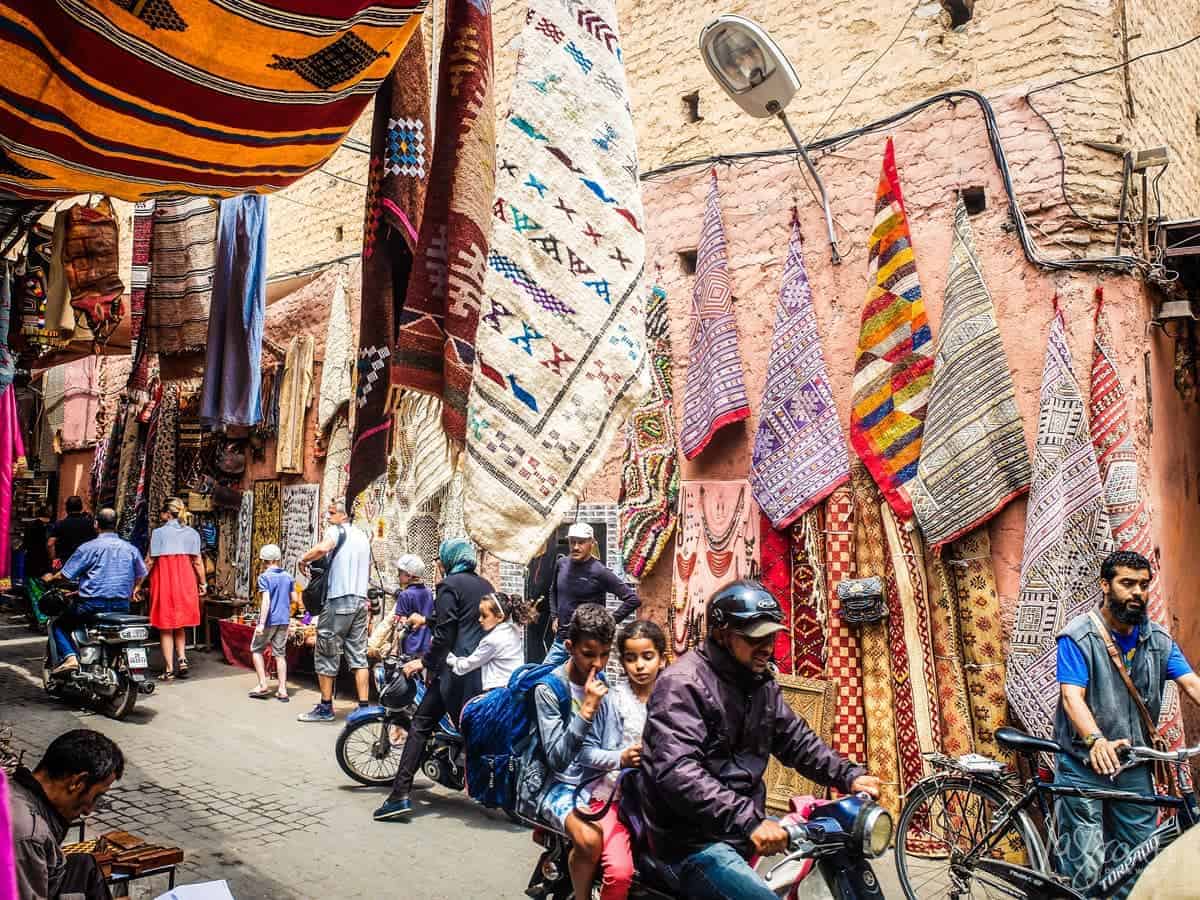 No holiday to Morocco would be complete without visiting a medina in Marrakesh.

Marrakesh or is the fourth largest city in Morocco located west of the foothills of the Atlas Mountains.

The region has originally inhabited by Berber farmers since Neolithic times and founded in 1070 by Emir Abu Bakr ibn Umar as the imperial capital of the Almoravid Empire.

These Almoravids established the first major structures in the city and shaped its layout. The red walls of the city, built by Ali ibn Yusuf in 1122–1123 and other structures of red sandstone led to city give the nickname of the "Red City".

Marrakesh grew rapidly and established itself as a cultural, religious, and trading centre for the Maghreb and sub-Saharan Africa and in the early 16th century became the capital of the Morocco.

Marrakesh comprises an old fortified city packed with vendors and their stalls. This medina quarter is a UNESCO World Heritage Site. Marrakesh has the largest traditional market (souk) in Morocco, with some 18 souks selling a wide range of items from traditional Berber carpets, spices, leather goods etc

Homosexual acts are illegal in Morocco, and can be punished with a heavy fine or imprisonment for up to three years. However male homosexuality is actually relatively common but nobody will admit this. Men you see holding hands in Morocco are not a gay couple but platonic same sex friends. Be discreet however when displaying affection but as foreigners this will be considered more acceptable

The best way to get around Marrakesh is on foot as most of the main attractions are clustered at or within walking distance of the medina. Alternatively, if you're looking for a fun way to get from the medina to other parts of the city, consider taking a calèche (horse-drawn carriage) or taxi.

Marrakesh is served by Ménara International Airport. The Marrakesh-Menara Airport (RAK) is southwest of the city centre. It has two passenger terminals which appear to be one large terminal.

The is the L19 Express Bus you can use to travel into city centre and serves many of the major hotels in Marrakesh. The schedule operates from 06:00am to 11:30pm every 20/30 minutes with typical journey time of 40 minutes. Previously you could get a free return ride if you kept your ticket and your return journey was no later than two weeks from ticket date but check with a staff member if this is still operational.

There are local city buses which are much cheaper and go to downtown Marrakesh. Original bus routes 11, 12, 18, 20 and 33 but check with driver to ensure the bus is taking you to correct area of city.

Today there are over 1,000 riads offer accommodations in the medina area of Marrakesh. They are the first choice for most traveller as offer an authentic accommodation experience. Many are the equivalent of a classy town house many of which are owned and operated by Europeans. These were once-neglected buildings have been refurbished in the traditional style by their new owners.

Some of these riad guest houses are labelled “gay-friendly” and are used to homosexual clients asking for a double bed. Generally, you will not be offending anybody by your request despite the Moroccan attitude to same sex relationships.

As the afternoon approaches Jemaa el Fna is turning into a huge open-air restaurant. This is an area with lots of makeshift food stalls are put up all over the place and it does not take long for the aromas of charcoal, barbecued meat and exotic spices. The daily spectacle worth visiting.

Located north of Jemma el Fna, the souqs of Marrakesh are among the biggest in the country. This labyrinth of narrow streets, thoroughfares, and vaults can be experienced by just strolling through the oriental bazaars. The diversity of the merchandise offered is amazing. Each of the different souks is divided into zones by types of trade. While passing through the bustling markets you can watch the manufacturers at work in their workshops.

Maison de la Photographie is located in a renovated Riad in the northern part of the Medina, close to Ali ben Youssef Madrasa. A collection of around 8,000 photographs made between 1870 and 1950 in the photo museum provides the material for the changing photo exhibitions that take you back into the past of Morocco. In addition, the museum presents younger works of Moroccan photo art. Thus, it is a place to retreat for anybody who want to avoid the crowds of tourists.

The Agdal Gardens laid out in the 12th century by the Almoravids is declared a “World Heritage Site” by the UNESCO. However, with a length of 3 km and a width of 1.5 km the area covered by the pomegranate, orange, and olive trees that are planted there in a geometric pattern is much bigger. In the park, there are two water reservoirs that are fed with fresh water from the mountains of the High Atlas by a sophisticated irrigation system.

In the 1990 as the influx of Europeans moved to Marrakesh gay night life started to develop. The gay night life is located in the Avenue Mohammed V in the district Gueliz

Search on social media or connect with a local such as grindr app to check on current most popular night life venues and open hours.

Marrakesh is surrounded by lemon, orange, and olive groves which form part of the city's culinary characteristics along with heavily spiced but not hot cuisine.

A specialty of the city and the symbol of its cuisine is tanjia marrakshia which is a local meal prepared with beef meat, spices that is slow-cooked in a ceramic pot in traditional oven in hot ashes.

Tajines can be prepared with chicken, lamb, beef or fish, adding fruit, olives and preserved lemon, vegetables and spices, including cumin, peppers, saffron and turmeric. Shrimp, chicken and lemon-filled briouats are another traditional specialty of Marrakesh.

Many dishes are service with seasoned rice cooked with saffron, raisins, spices, and almonds, while couscous may have added vegetables.

The Moroccan tea culture is practiced in Marrakesh where green tea with mint is served with sugar from a curved teapot in small glasses. Alcohol is sold in some restaurants, riads and hotels but not everywhere. Check when you arrive on the alcohol policy of the business.

There are traditional hammam in the city where locals and foreigners visit. These you can go to relax for the intense heat to exfoliate your dead skin and most offer a traditional massage service. They are not for male sexual contact.

This medina quarter in Marrakesh has the largest traditional market (souk) in Morocco, with some 18 souks selling a wide variety of items.

As homosexual acts are illegal in Morocco there are no LGBTQ popular events like in Europe.