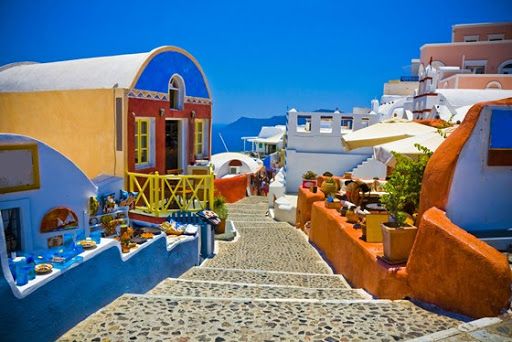 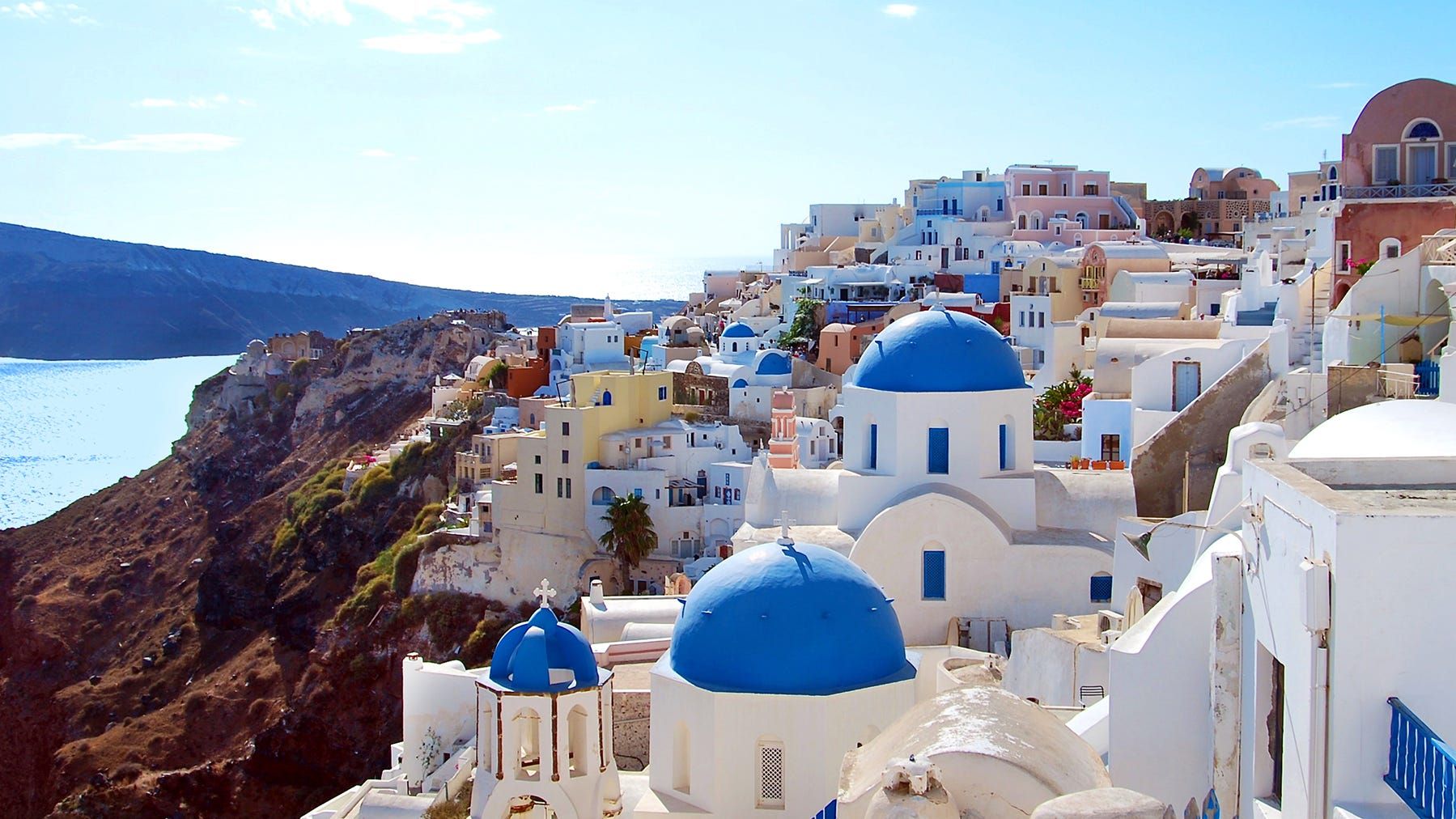 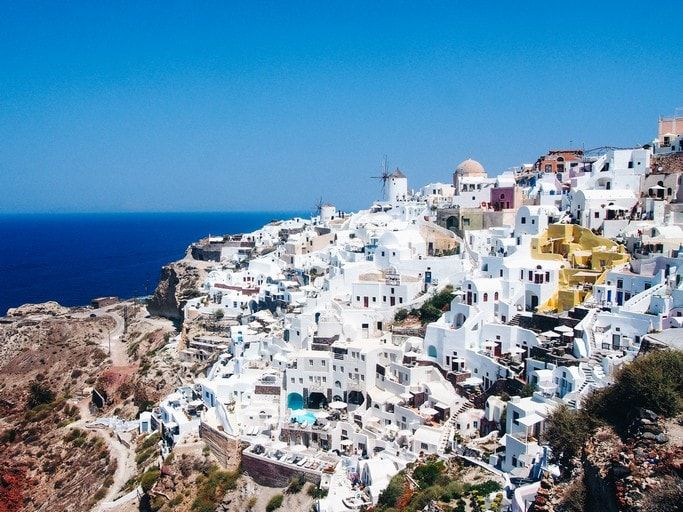 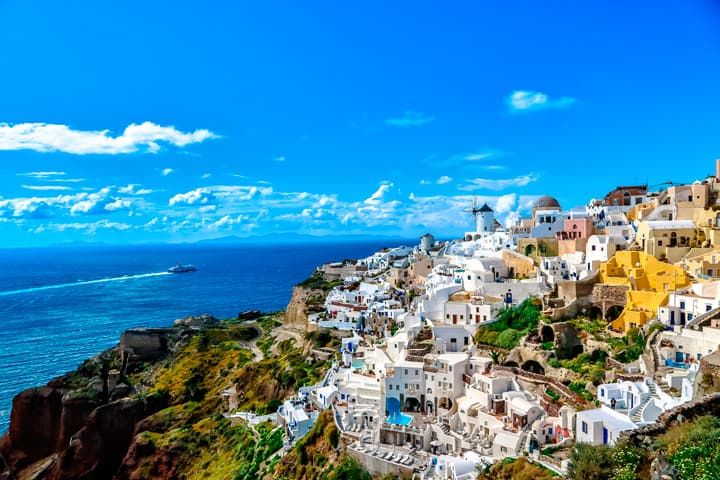 The expansion of tourism in recent years has resulted in the growth of the economy and population with Santorini being ranked among the world's top islands by many magazines and travel sites,

Santorini has two ports: Athinios (Ferry Port) and Skala (Old Port). Everybody arriving from Athens or other islands by sea will be dropped off at Athinios. Cruise ships arrive at Skala and passengers are transferred by local boats to the shore.

In the past few years, Santorini has also become a playground for the rich and famous with lots of amazing bars, clubs, and restaurants to be found in its main towns of Fira and Oia but they tend to be more expensive than other islands in Greece.

The island is a gay friendly destination and attracts lot of tourists who are gay.

Taking the bus in Santorini is obviously the cheapest way to move around as for a few euros you can go pretty much to all the big towns and main attractions. Check at your hotel on directions so they can recommend best local options.

Hiring quad bikes or motorbike is another option if you are used to these forms of transport.

UBER and LYFT do not exist in Santorini.

Santorini is one of the few Cyclades Islands with a major airport, which lies about 6 km southeast of downtown.

Santorini has a special Airport express bus, which runs a direct route to Santorini's main town of Fira. With no other stops, the ride takes only 10 minutes, and will only cost only a couple of euros whilst a taxi will be more expensive.

The 2 main places to stay are Oia or Fira which are both very touristy but in different ways. Oia is quieter, generally has more expensive hotels and higher-end restaurants. After the sunset, Oia gets very quiet. Fira has the more nightlife, lively restaurants and closer to most of the beaches.

Beach vacation best options are in Kamari, Perissa, and Perivolos. All 3 areas have excellent hotels, plenty of restaurants, umbrella and sunbed rentals, water sport centres, and great swimming. Like most beaches in Santorini, these feature black volcanic sand, gentle sea, and refreshing waters.

The vast majority of bars, lounges, and clubs in Santorini are located in Fira. High-end lounges and bars tend to be near the caldera where patrons can sip local wine and cocktails while watching a colourful sunset over the sea.

Inland from Fira there are more casual bars and nightclubs with loud music, and all-night dancing until 5:00 a.m. or later during the high season.

Santorini has some of the most beautiful beaches on its eastern and southern coast.  The beaches are great and well-organised with sun loungers.

There are two gay friendly popular nudist beaches. You will need a car or need to get a taxi to reach Koloumbos beach which is 8.5 km from the capital, Fira. When you reach the beach, after 100m further to the left to reach the gay popular section.

One of the best nudist beaches and easy to reach is Vlychada but is straighter.

Oia is Santorini’s most picturesque town. It’s located at the northern tip of the island and is famous for its fabulous sunset views. The town is busy through the day up until sunset but then after the sunset returns to normal as people leave.

Megalochori is a picturesque village known for its traditional architecture and wineries. The village dates back to the 1600s, and you’ll still find cave houses from this era, along with neoclassical mansions, and centuries-old churches. The centre of the village has family-run tavernas and tasting rooms for the local wineries.

There are very few people who live on Santorini all year but those that do live in Emporio, where, you’ll find a maze of alleyways peppered with tavernas, kafenia (traditional coffeehouses), and only a handful of family-run hotels.

Mesaria is another popular local stronghold, which has a feel of being a slightly more modern Emporio but remains almost free of tourists with some local restaurants serving some outstanding food.

Just a 10-minute walk from Oil is Finikia, a tiny, densely-built village with a few great restaurants and traditional cave houses packed along incredibly narrow walking paths with not card as roads are not wide enough.

Fira is the capital and largest village on the island with a wide range of shops to suit all tastes and budgets. Shops stay open well into the night in Fira. Oia also has plenty of shopping, mostly in high-end fashion boutiques featuring Greek and international designer labels, though there are plenty of spaces here to buy local art, handmade crafts, wine, and thoughtful souvenirs.